Mulch: How to Use it & Prevent Problems 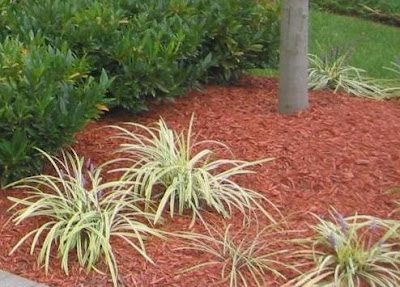 How to Calculate the Amount of Mulch Needed
To determine how many cubic feet of mulch is needed, you need to calculate the surface area and the desired depth of coverage. There are 27 cubic feet in a cubic yard. One cubic yard will cover a 324-square-foot area with an inch of mulch. Figure out the square footage of your bed, that is the width times the length for square or rectangular shaped beds. The square footage of a circular bed is the distance from the middle of the circle to the outside multiplied by itself and then multi- plied by 3.14 (which is pi). Multiply your square footage by the depth desired (in inches) and divide by 324 square feet. This will tell you how many cubic yards you will need.

Problems
Mulch Toxicity: Though mulch benefits plants, “sour” mulch can quickly damage plant tissue and lower the soil pH causing injury or death. Bedding and low-growing woody plants are most easily damaged. Symptoms include yellowing of the leaf margins, scorching or dropping of leaves and occasionally entire plant death. Although it may be several days before symptoms appear, spreading sour mulch can damage plants immediately.

Sour or “acid” mulch is caused by poor handling or storing of mulch resulting in anaerobic (without air) conditions. Mulch piles need to “breathe” to prevent anaerobic conditions from occurring. In the absence of air, microbes in the mulch (mostly bacteria) produce toxic substances such as methanol, acetic acid, ammonia gas, and hydrogen sulfide gas.

Sour mulch smells like vinegar, ammonia, sulfur or silage. Good mulch smells like freshly cut wood or has the earthy smell of a good garden soil. Another way to determine if mulch is sour is to test its pH. Toxic mulch will have a pH of 1.8 to 2.5.


To prevent mulch from turning sour or to cure sour mulch, you need to turn your pile once or twice a month, more frequently if the pile is very wet. Do not let the pile get larger than 4 feet thick in any dimension if you are not turning the pile regularly. A good aeration will eliminate the toxic com- pounds in 24 hours, but to be safe allow three days.

Slime Molds: Slime molds are fungus-like organisms that can be a nuisance in mulch. They typically appear suddenly during warm, damp weather. The resulting masses may be several inches to a foot or more in diameter and vary in color, including bright yellow or orange. They are unsightly but harm- less, feeding on decaying organic matter such as that found in new hardwood mulch. No pesticides are recommended. Simply scoop up with a shovel and remove.

Matted Mulch: When thick layers of dry mulch are applied or existing mulch dries, some nuisance fungi can grow, forming a mat of mycelium (a mass of fine threadlike structures that make up the body of the fungus). The mycelial mat is hydrophobic (repels water). As a result, the mulch is not easily penetrated by water, which can prevent plants from receiving adequate water. Newly installed mulch should be watered to prevent this problem. If existing mulch is matted, break apart the matted layers with a rake or claw cultivator.

The Artillery Fungus: Occasionally, microorganisms in mulches can become a nuisance. The shotgun or artillery fungus (Sphaerobolus) may cause serious problems. While it delays the mulch, it also produces fruiting structures that resemble tiny cream or orange-brown cups that hold a spore mass resembling a tiny black egg (1/10 inch in diameter). This fungus shoots these spore masses high into the air. They stick to any surface and resemble small tar spots on leaves of plants, on cars or on siding of homes. They are very difficult to remove. To avoid damage to cars and houses do not use mulches that contain cellulose (wood). Use pure bark mulches, especially pine, or if the mulch is already in place, cover the hardwood mulch with pine needles.

Stinkhorn Fungi: Stinkhorn fungi, such as Mutinus caninus and M. elegans, can colonize hardwood bark mulch. The fruiting bodies or mushrooms often come up in the fall and exude a very unpleasant odor. Scoop up and dispose of the mushroom as soon as they appear. Consider replacement of hardwood bark mulch, which contains a lot of wood, with an- other choice, such as pine needles, pine bark, or a composted mulch.

Shotgun Fungus
What are some solutions to Sphaerobolus stellatus growing in mulch? – Pennsylvania
Researchers don’t know a great deal about this organism, which is also known as the shotgun fungi. However, it apparently is becoming a more prevalent problem in many regions of the United States and Canada. Extension horticulturist Dr. Larry Kuhns is leading a study at the Pennsylvania State University with hopes of learning enough about shotgun fungus to offer practical solutions.

Sphaerobolus thrives in moist wood mulch and produces its spores in spring and fall. While this fungus does not seem to harm landscape ornamentals, it can create serious aesthetic problems when it sporulates and can stain walls, automobiles or other objects. The problem stems from the fact that the fungus “fires” its spore masses into the air. Wherever they land, they stick with incredible tenacity- the spots resemble fly specks- and defy almost every effort to remove them. These spore masses may not be noticeable at first, but as they accumulate over several years, they create a splattering effect similar to black paint sprayed through a partially clogged nozzle. Kuhns is aware of instances where the problem was severe enough to prompt insurance claims and even lawsuits against the landscapers that installed the mulch.

According to Kuhns, the rising occurrence of shotgun fungus may relate to the increasing wood content of many mulches that groundscare professionals apply to landscapes. Woody material, as opposed to bark, is the food source of this fungus. Several possible factors may be contributing to this increase in wood content. “Bark” mulch- more than ever- often contains more wood than bark. Further, waste wood- pallets, for example, is increasingly being converted to mulch for landscape use. Many landfills now prohibit landscape waster and much of this is converted to mulch as well. Combined with greater use of mulch generally, the increasing wood content of land- scape mulches may be promoting the spread of Sphaerobolus. As Kuhns points out, however, much of what is “known” about Sphaerobolus is based on educated guessing.

At this point, authorities can offer few practical solutions. Applying a layer of bark mulch over the top of Sphaerobolus-infested wood mulch may help block the spore masses from reaching vulnerable surfaces. Ensuring any mulch you use near visible surfaces primarily is composed of bark- not wood- should also help. Once staining has occurred, there isn’t much you can do. That’s why finding a way to remove the spore stains from various surfaces is one of Kuhn’s research goals.

Research Update: A new study reaffirms the benefits of mulching trees
Mulching tree bases may be one situation where you can have too much of a good thing. Because researchers have proven that mulching offers many benefits, some grounds managers get carried away, sometimes applying excessive amounts to depths greater than 50 centimeters (20 inches). This practice has prompted several studies about mulching, a few of which reported detrimental effects such as oxygen deprivation or root rot. To test these results, researchers at Cornell University looked at the effects various thicknesses of mulch had on young trees.

The investigators used chipped pine mulch and shredded hardwood mulch around young trees—Pinus strobus and Quer- cus palustris—in depths ranging from 7.5 to 25 centimeters (3 to 10 inches). After 2 years, the results affirmed many of the beneficial effects of mulching. The mulch improved soil-moisture retention, moderated soil-temperature swings and sup- pressed weed growth. Moreover, the mulch did not significantly reduce oxygen levels, even where the mulch was as deep as 25 centimeters.

However, the study yielded other, less-expected results as well. Weed suppression improved with increasing mulch depth, even up to 25 centimeters. Also, the mulch did not alter pH or nitrate levels in the underlying soils. Interestingly, one of the possible drawbacks of mulching- trunk infection by pathogenic fungi or canker-causing agents- did not occur in this study. The investigators specifically looked for infection and even created wounds as entry sites for pathogens. Possibly, no appropriate pathogens were present in the mulch, but this is an encouraging result nevertheless.

A potential problem with using thicker mulch layers (15 to 25 centimeters in this study) stems from the fact that this may delay the warming of soil in spring, which could slow root growth. However, this study reaffirms that the often-recommended depth of 7.5 centimeters provides optimum benefits with few, if any, negative effects.