The adult form of the lily leaf beetle. Photo: Ann Whitman
Colorful, hardy lilies have been a perennial garden mainstay for generations. Sadly, in some parts of the country gardeners have all but given up on these beauties, because of a small, red beetle with an insatiable appetite for lily foliage. Left unchecked, the lily leaf beetle devours leaves, leaving a bare, scarred stem in place of the usual sturdy stalk laden with flamboyant, trumpet-shaped blooms. Researchers are studying the effectiveness of introducing some of this exotic pest's natural enemies; in the meantime, there are safe, organic ways to help keep the pest in check. In regions that have been invaded by beetle, it takes diligence to protect lily plants. But that makes the rewards — glorious flowers and, in some cases, delightful fragrance — all the sweeter.
Accidentally introduced into North America through Montreal, Quebec, in 1943, and discovered in Massachusetts during the summer of 1992, the scarlet lily leaf beetle (Lilioceris lilii) wreaks havoc in flower gardens wherever it travels. As of June 2012, it has been found in all six New England states, New York and, most recently, near Bellevue, Washington. In Canada, the lily leaf beetle is present from the Maritime Provinces (excluding Labrador/Newfoundland) and west to Manitoba. Although its origin is unclear, the lily leaf beetle is widely distributed throughout Europe, Asia, the Middle East and North Africa.

The lily leaf beetle lays eggs and completes its life cycle exclusively on true lilies and fritillaria (daylilies are not affected). Oriental, rubrum, tiger and trumpet lilies as well as Oriental trumpets (orienpets) and Turk's cap lilies and native North American lily species are all vulnerable, but the beetle prefers some types more than others. Research at the University of Maine shows that Asiatic lilies are the most vulnerable, while some Oriental lilies are more resistant. The most resistant lily cultivars in their tests were Lilium henryi 'Madame Butterfly', Lilium speciosum'Uchida', and Lilium 'Black Beauty'. The beetles may also be having an impact on populations of native Canada lily (Lilium canadense), as well as other rare and endangered lily species found in northeastern North America.
The adults also eat the leaves of some other garden plants, including lily-of-the-valley (Convallaria majalis), Solomon's seal (Polygonatum), potato (Solanum tuberosum), flowering tobacco (Nicotiana), hollyhock (Alcea) and hosta.

Egg masses on the underside of a lily leaf. They range in color from red-orange to brown. Photo: Suzanne DeJohn
A chewed and defoliated lily plant may be your first indication that this pest has arrived in your garden. Both the adult and juvenile phases are voracious feeders and they can do a lot of damage in a very short time. Examine your lilies carefully several times a week, beginning as soon as the plants emerge from the ground. Adult beetles overwinter in the soil or in plant debris, and will begin laying their eggs early in the growing season, often starting on spring-blooming fritillaria that emerge with the daffodils. Each female lays up to 450 eggs, which hatch in one to two weeks. To prevent severe damage, it's important to curb the insect's reproductive cycle early in the season.
The adult lily leaf beetle is scarlet red on top and black underneath. It's just under a half-inch long and has an elongated body with relatively long legs and long antennae. Though these adults do feed on the foliage, their primary concern is to reproduce. If you see the adult beetles, it is very likely that you'll also be able to find egg masses on the undersides of the leaves. The red-orange to brown eggs are tiny and laid in narrow, irregular rows.

Lily leaf beetle larvae covered in a "fecal shield"
The lily leaf beetle larvae, or grubs, cause the most damage. Hundreds of larvae may hatch at one time, and they begin eating immediately. Though the leaves are their preferred food, they will also devour buds, flowers and stems. Most feeding takes place under the leaves or at leaf nodes along the stem. The larvae are yellow, brown or orange and would be relatively easy to spot if they didn't have such an effective and disgusting way of disguising themselves: As the larvae eat, they pile their excrement on top of themselves. This makes the larvae difficult to see (look for soft, brown masses), difficult to destroy (squishing the mass doesn't necessarily kill the larvae) and very unpleasant to touch (some gardeners wear latex or nitrile gloves). The larvae typically feed for 16 to 24 days and then enter the soil to pupate. Adult beetles will emerge 16 to 22 days later and continue feeding until fall. 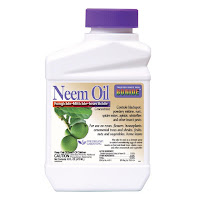 For now, gardeners have a few options for dealing with this destructive pest. Hand-picking the adult beetles is very effective if you have only a few lily plants. But you need to be vigilant and fast. The beetles are very quick and as soon as they sense movement, they will immediately drop to the soil level and lie on their backs, which makes them difficult to find. Use this habit to capture and destroy the adults by holding a jar of soapy water under them and nudging them off the leaf. They will immediately fall into the water. Scout your plants several times a week, especially early in the season as the adults emerge from the soil. Biological control using natural lily leaf beetle predators shows the most promise for controlling the spread of this invasive scourge. Although the beetle has no natural predators in North America, the University of Rhode Island Biological Control Laboratory, in collaboration with CABI-Bioscience and colleagues in France, has identified several European insects that parasitize the lily leaf beetle grubs. The ant-sized parasitic wasps lay eggs on the beetle grubs, which subsequently hatch and kill their host. These insects have been released at research sites in all New England states and are proving effective at decreasing the lily leaf beetle populations for at least several miles in the surrounding areas. These controls are not yet commercially available for gardeners, but show long-term promise. See the reference section for links to more information.
Adults lay egg masses under the lily leaves or along the stem and they must be destroyed quickly — they hatch in just 7 to 10 days. You can either pick off the leaf and drop it in the jar of soapy water or crush the eggs. They are very tiny and hard, so it takes some focused effort to make sure they've been crushed.
The larvae are the most difficult to control. Hand-picking is an option, but it requires almost daily patrols and careful observation. Squishing the larvae is tricky because they're covered with excrement so they slip easily between your fingers. Wear latex or nitrile gloves. It's often easier to pick off the whole leaf and drop it into the jar than to squish them.
There is a pesticide that has proven to be relatively effective. Neem Oil is a botanical insecticide made from the neem tree. Neem kills larvae and repels adults. It is most effective early in the season and on young larvae and must be diligently applied every 5 to 7 days. The larvae's "fecal shield" seems to provide it with some protection from sprays, so spray coverage must be heavy and complete. Late-season larvae seem to be somewhat resistant to neem.
Although other insecticides have shown to be effective, there is concern about how these pesticides affect the environment and beneficial, non-target insects. Pesticides containing imidacloprid, in particular, are now linked to honeybee death and colony collapse disorder. This pesticide causes the nectar and pollen of treated plants to become toxic to bees.

Source: http://www.gardeners.com/how-to/lily-beetle/8090.html
Posted by Unknown at 5:00 AM