Green Roofs can be Good for People, too 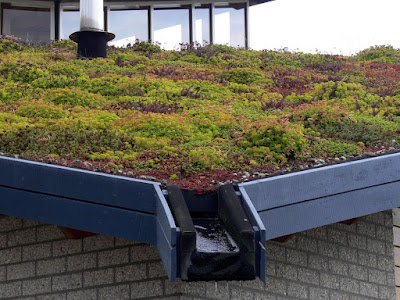 If you’ll pardon the pun, smart roofs, green roofs, cool roofs – whatever they’re called — are the hottest things in new construction. It’s a global phenomenon: Last month, France passed legislation that new buildings in commercial zones must have either green roofs or solar panels.
France is not alone. In Switzerland, all buildings must have a green roof if they have a suitable pitch. On this side of the Atlantic, Toronto began requiring some new buildings to include rooftop planting in their design as early as 2009; the requirements now apply to industrial buildings as well.
Most of us think green roofs equate to roofs with plants (often succulents or drought-resistant grasses). But smart roof design techniques as basic as painting black roofs white count as well.  Highly reflective surfaces not only cut energy bills, they can potentially improve the health of local residents and citywide environments.
These are the intriguing findings of a consequential new report on the impact of “smart roof” retrofits. The report, by Washington-based green building and technology advisory firm Capital E, examines the results of reroofing efforts on Washington-owned buildings.
We’ve known for years that smart roofs save energy, and we’ve been able to come up with methodologies to quantify those savings. However, the health benefits of such design choices have been harder to figure out. The authors of this report, Greg Kats and Keith Glassbrook, have addressed this complex question, and their findings could have an impact on improving the health of residents in urban areas across the nation.
Roofs typically make up 15 to 25 percent of most cities’ surface areas. And because roofs can typically be replaced or retrofitted more frequently than entire buildings, they represent an opportunity for developers and building owners to dramatically cut the “heat island effect” in urban environments as well as achieve energy cost savings and other goals relatively quickly — as long as they make smart roof design choices.
That’s because lower ambient air temperatures result from the use of smart roof design techniques. Obviously, painting roofs white increases solar reflectivity. Likewise, growing vegetation increases rooftop evaporation and transpiration rates and provides shade to the roof surface. Through these processes, cool roofs and green roofs lower ambient air temperatures and reduce possible airborne pollutants.
Use of such techniques, in turn, can have public health benefits, particularly for low-income and elderly residents who tend to be more vulnerable to illnesses related to extreme heat and poor air quality. Moreover, heat mitigation through adoption of cool and green roofs can help ameliorate the effects of heat stress.  While additional studies can test the report’s more ambitious findings, nevertheless, microclimates should improve with attention to heat-producing surfaces.
The report will prove to be relevant reading for designers, architects or city officials trying to battle the pernicious health effects of urban heat islands. These new methodologies suggest ways for cities to quantify the benefits of their building codes, policies and incentive programs.
Cities across the country that adopt these smart roof technologies may be able to secure private and public benefits that include energy savings for building owners, reduced city peak summer temperatures, enhanced health and livability and perhaps even cuts in global warming.
Check out the report here.
Article by Robert Ivy
Robert Ivy is chief executive of the American Institute of Architects.