How to Prune Evergreens

Most varieties of evergreens should be trimmed each year, as they need it, to keep looking their best and to retain their symmetry.


In the pruning of evergreens, it is desirous to retain the natural growing habits as much as possible, merely removing some of the longer, ragged-looking tips to encourage a denser, full growth. Evergreens are seldom trimmed sufficiently.

Juniper & Arbor Vitae
These are the “finger group.” Their branches grow out like myriads of tiny green hands. (See sketch 4.) Do not cut the protecting tips like fingers caught in a saw, but neatly disjoint them at the stem points. Arbor Vitae may be sheared severely, and thrive best if pruned in this manner. Junipers often lose their attractive appearance if sheared too heavily. For unique effects with spreading evergreens planted in rockeries or rock walls, weird shapes are often desirable to obtain attractive effects. (See sketch 10.) By pruning off some of the side branches, you may encourage them to trail in varying directions. Arbor Vitae make beautiful evergreen hedges, although they require consistent shearing and shaping each summer to make them compact and uniform.

Fir and Spruce
These are the “Christmas Tree” groups which appear best as a perfect cone of soft masses of needles not too obviously pruned. All branches projecting beyond the natural pyramid nature should be cut back into line, and prune the side growth to overcome patchiness and encourage dense growth. In pruning these varieties you are dealing with the buds which form the new growth. On each branch tip there is a cluster of buds, usually dominated by a large central bud. (See sketch 9.) On the branches where bushiness is desired, remove the central bud carefully with the thumb and forefinger. The remaining buds will branch out making the tree dense and compact. If the branch is to continue in a straight line, the central bud must be carefully preserved. The topmost straightest point of the tree is the central leader. This bud must be saved, and if damaged or blighted, two leaders will form which will spoil the appearance of the tree. (See sketch 6.) Should this happen through some catastrophe, tie a brace to the most vigorous side branch and tie into an upright position with soft twine or cloth strips. (See sketch 7.)

Hemlock and Taxus (Yews)
These are the “fern-like groups” and the most graceful of all evergreens, with long sweeping branches. Taxus usually require shortening of the long shoots they put forth in the early spring to keep them from becoming too open. (See sketch 8.) Hemlocks require some trimming, also, especially in shady locations. Do not shear with hedge shears, but rather remove the longest shoots at the branch base. (See sketch 5.) 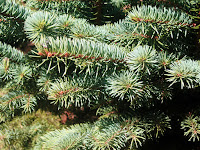 Pine
The pine is a “rugged individual.” Seldom does it require shearing, and pruning destroys its individual characteristics. Like the Fir and Spruce, the central leader should be preserved and retained by tying to a brace if it becomes destroyed. The Mugho Pine (dwarf, globe shaped) is one exception. Prune this tree as you would a Juniper to keep it tight and symmetrical, by cutting back the new growth to one-half its length each sum- mer. If left untrimmed, it becomes ragged.
Posted by Unknown at 11:23 AM