Prevent Moss From Growing On Your Roof! 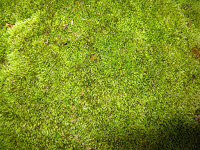 Moss is a plant species that grows really well in moist cool areas. There are many different species of moss. Some common characteristics among these species are that moss does not have flowers or seeds, they must have a damp environment to grow in because they do not have any root system to secure water, and they are usually extremely green with tiny leafs. 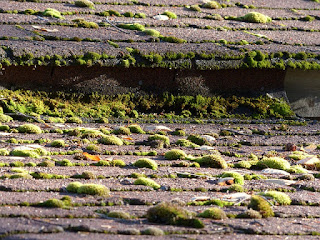 Why is Moss on The Roof Bad?

As the moss thickens and grows on an asphalt shingle roof it can raise the shingles up (much like a jack under a car). When the shingles get risen it allows water to go under the shingles causing the decking to rot and causing the roof to leak. The raised shingles also pose problems when heavy winds are present because they will catch the wind like a sail and this can cause shingles to be torn/blown off the roof. 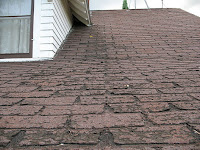 A moss buildup on the roof causes more debris to get trapped on the roof. This debris promotes water buildup which makes the roof at risk of much more rotting and leaking.
Moss can actually damage the asphalt shingle components leaving it to break down faster.

How to Prevent Moss

Because moss grows well in shaded areas one way to control moss/remove it from roofs or other areas is to remove its shade. This can be done by removing trees, trimming tree branches to allow more sun to penetrate, or remove bushes and other type of plant life that may be blocking the sun.

This method of moss prevention and removal is highly effective but remember that it may be ineffective if the weather is often overcast and cloudy.

How NOT to Get Rid of Moss

Roofs are an investment that must be safe guarded. That being said, we want to give you some “what not to do” tips when trying to remove moss off of your roof.

1. Do not pressure wash the moss off

By using a pressure washer to remove the moss you are going to dramatically reduce the life of your roof. How? The high powered water will remove the asphalt shingle granules which help protect the shingles and ensure a longer life span.

2. Be careful with using acids to remove moss.

If your acidic mixture is too strong or stays on the roof too long, it can eat away at the shingles. If your roof cleaning solution has not been tested previously, make sure you test it on some spare shingles before applying it to your roof.

3. Do not scrape the moss off of the roof.

This can rip, crack, and break the asphalt shingles themselves.


4. If any water is used to remove the moss, do not spray the water at an upward angle.

If you do, this can cause water to go under the shingles and leak into the house or rot the wood decking of the roof.